Mhen'ga is a planet discovered during the 14th planet rush. Currently colonized by the U.G.C., the planet's extra-terrestrial capital is Esbeth. Populated areas are lined with dirt roads, leaving a very primal feel to the overall environment. Covered in lush flora, the planet is sometimes referred to as 'The Jungle Planet'. Sometimes spelled as 'Mhen'gha' or 'M'henga'.

This small jungle town, Esbeth, doesn’t even have proper roads. Prefabricated buildings have sprung up on all sides.

The wilds of Mhen'ga, consisting of mostly dense forest woods, and lush and colorful jungle greenery.

There are common townspeople who live in Esbeth. Other lifeforms can be encountered to the east of Esbeth, into the jungles Mhen'ga is best known for.

General Strategy: On Mhen'ga, most of the hostiles, barring some that are very relevant to specific quests, are sapient life forms trapped in the Stone Age. Some of them don't have weapons and the ones that do have things like Spears and blow darts. There just really horny and see fighting as a kind of aggressive foreplay and decider of who tops whom. As such most of the enemies on this world are highly susceptible to Lust attacks (Tease, Pheromone, Drug, Psionic), ranged attacks, and Special Attacks. Their movesets rely on increasing their own evasion and decreasing the player's through poisons, drugs, and their own natural adaptations and abilities so that it will be easier to seduce the player into giving up. 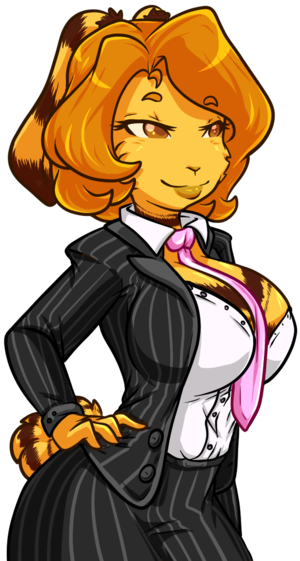