Naruto to Boruto: Shinobi Striker is the latest game based on the iconic series and it finally allows fans to create their own dream ninja.

Naruto to Boruto: Shinobi Striker had some big shoes to fill with it being the first Naruto title following CyberConnect 2’s fantastic Ultimate Ninja Storm series. While that series focused on retelling Naruto’s tale from start to finish with more conventional one-on-one fighting game mechanics, Naruto to Boruto: Shinobi Striker takes a different approach as it allows players to create their own ninja and participate in four-on-four brawler-style battles. I’ve put a lot of time into Shinobi Striker and I can say that while it doesn’t live up to the precedent that the Storm series set, it’s still an enjoyable game that fans of the anime and manga should have quite a bit of fun with, even with all of its faults.

It’s hard not to play the game for a few hours and immediately start comparing it to Dragon Ball Xenoverse. Many of the same mechanics found in that game carry over to Naruto to Boruto: Shinobi Striker. There’s a set amount of single player or cooperative missions to choose from, multiplayer modes that’ll have you working with other players against an opposing team, as well as various characters you can choose to be your mentor.

Honestly, I don’t think it’s a bad thing that the developers took this approach, it works in this world and I had a lot of fun with it, just as I did in Dragon Ball Xenoverse. Unfortunately, Naruto to Boruto: Shinobi Striker ends up feeling like a less refined game than Xenoverse more often than not.

There’s a hub world where you’ll spend a lot of your time in Shinobi Striker. Whether it be to customize your ninja, link up with other characters or players, or just dance with a couple of other randos in your lobby. I definitely wish there were more to do in the lobby but for what it’s worth I found myself making friends and interacting with other players more than I thought I would. It’s cool seeing tons of other players and how they decided to go about customizing their own ninja.

“It’s hard not to play the game for a few hours and immediately start comparing it to Dragon Ball Xenoverse.”

Speaking of which, customization is a huge part of Shinobi Striker. From the get-go, you’ll be putting together your own ninja and selecting what village they hail from. Don’t worry though, you can essentially customize their gear whenever you want to make them appear as if they were from another village. You can also buy an item that lets you re-customize their face and body traits all over again. There are a ton of different items to unlock so fans should have a lot of fun exploring different outfits, weapons, and more. Everything also has different stats so you’ll truly be able to customize your own play style on top of your unique look.

Almost all the things you do in Naruto to Boruto: Shinobi Striker will net you scrolls with different rarities. You take these scrolls to Tenten’s shop to have them appraised, and from there you’ll receive new items and gear. There’s a huge amount of variety here and it’s a lot of fun getting the gear you haven’t seen before. It’s worth mentioning, of course, that I didn’t see every outfit you can unlock in the game as there are literally hundreds of things to get.

There are four different classes in Naruto to Boruto: Shinobi — brawler, ranged, defense, and a healer. They each felt really unique to one another and if you become skilled enough, you can really change the course of battle using different skills to support your team. I think one thing players will need to learn quickly if they hope to win online matches is that each of the four classes is vital to victory.

Team composition is very important which is why it’s a little odd to me that players can’t see what their teammates are going to choose prior to a battle. You can change once you’re eliminated in a fight and respawn, but if you let the other team get an advantage during battles it could cost you a game. Quality of life things like that would’ve been a good addition to have in a game that’s very reliant on team play.

“I think one thing players will need to learn quickly if they hope to win online matches is that each of the four classes is vital to victory.”

On your journey through Naruto to Boruto: Shinobi Striker, you’ll have the opportunity to be mentored by one of many iconic characters from the series. Of course, you’re not limited to one and can change anytime. Each mentor can teach you different jutsu and unlock you costumes based on their iconic looks from the series. Justsu are typically exclusive to one class so it’s important to look over what each character will get you before training with them. I personally stacked my range and healer class by learning under Sasuke, Sakura, Itachi, Sarada, and Kabuto during my time reviewing the game.

Visually, Naruto to Boruto: Shinobi Striker looks far closer to the manga than it does to the anime. Environments look absolutely wonderful and the development team should be commended for how much detail they’ve input into each of the game’s maps. It truly feels like you’re running around some expansive setpieces from the Naruto universe.

It should be noted that while each location in the game looks great, there’s not many of them to play in. I would’ve liked to see a couple more maps included, but even with that thought in mind, I never truly got bored running around each one of them. I’d say that my favorite map was easily the Hidden Rain Village. On top of that, you’ll also be able to explore the Hidden Leaf Village, the Hidden Sand Village, the Hidden Cloud Village, as well as a forest outside of the Hidden Leaf.

“It truly feels like you’re running around some expansive setpieces from the Naruto universe.”

There’s a slew of different game modes and mission types to experience in Shinobi Striker. The solo and co-op missions will have you take on escort scenarios, defense, giant boss battles, and more, while the multiplayer content includes flag battles, base battles, barrier battles, and deathmatch. There is a point where some missions will be to difficult to take on solo so definitely get ready to link up with other players. I should mention that each competitive game mode also rotates and for some odd reason I didn’t get to try out barrier battles or flag battle. Which is a shame because I was really looking forward to trying those, and likely will once this review goes live, I’m unsure if they’re not available yet.

I played the game for multiple days and each time I checked I was only able to play base battle and deathmatch. Barrier battles seem like the most interesting, they have you either attack or defend different barriers on a giant map while the defending team also has to defend one of the games many giant bosses alongside their barriers. If you’re hoping to see a full-size Kurama though, you’ll be disappointed to hear that they’ve really shrunken down the size of some of the bigger summonings from the series.

Combat in Naruto to Boruto: Shinobi Striker will be hit or miss for a lot of players and it’s hard for me to determine where every particular player may stand on it. I found that combat works best in the cooperative missions, throwing other players into the fray is where things get the most clunky, not to say it doesn’t feel clunky in PVE content as well. There’s a basic attack button and secondary attack button that works differently for each class, so it’s pretty simple to pick up and learn quickly. If you’re using a controller, the two triggers work as the two jutsu you can have equipped, and there’s also an evade button as well as a button that allows you to use a substitution jutsu. In this regard, it’s quite similar to the Naruto Shippuden: Ultimate Ninja Storm series.

Online, connecting attacks can be a bit weird. It’s tough to micromanage four players around you and it’s even weirder when a jutsu locks on to you. I found difficulty dodging certain attacks and at times I was seriously scratching my head thinking about how certain attacks connected or what I could do in situations where I was facing more than one person.

There are also ultimate jutsu that can one-shot KO you and these can be absolutely game-changing. Not all of them are damage-based though, your class and the particular jutsu you can have equipped will determine its effect. One thing I’ll say is that there are jutsu that just seem astronomically better than others, making many skills in the game rather inconsequential. I found that trying out new things in the PVE missions to be the most efficient way of testing their value in battle. Being an anime game, I can’t help but think that balance wasn’t a huge concern for the development team.

Traversal is another key thing in Naruto to Boruto: Shinobi Striker. You can run on just about anything and everything. As I mentioned earlier, maps are expansive and it’s really dope being able to run up walls and on water. Naruto to Boruto: Shinobi Striker is at its best when you clash with enemy teams on the walls and ground simultaneously. There’s jutsu flying everywhere and it all looks really cool, but it can feel a bit too chaotic at times. This is where the game replicates the show and manga the most in my opinion. I think fans will appreciate these moments, but if you’re someone looking for something more competitive, you won’t find it here.

“Naruto to Boruto: Shinobi Striker will be enjoyed most by longtime fans of the series.”

Naruto to Boruto: Shinobi Striker will be enjoyed most by longtime fans of the series. It’s a clunky game for sure, but for some reason I found myself having a lot of fun with it. If you can gather four friends to take part in online matches or cooperative missions you’ll likely get the most ideal experience. As I previously mentioned, team composition is important and you’ll definitely have a competitive advantage if you have a good way of communicating with your teammates. 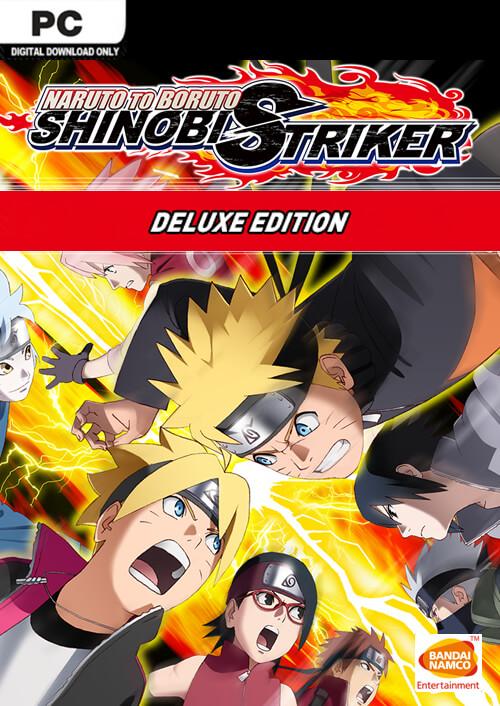 While it’s certainly not even close to being what we got with Naruto Shippuden: Ultimate Ninja Storm, it’s still a fun and enjoyable game that surprised me quite a lot more than I expected it to. The asking price of $60 might be a bit much to some, but if you’re a fan of Naruto in any capacity I’d say the game is worth checking out at some point.

Hey Naruto fans, the game is back with a completely new experience in NARUTO TO BORUTO: SHINOBI STRIKER! This new game you battle with a group of 4 and compete against other teams online. Graphically, SHINOBI STRIKER is also built in a completely new graphic style from the ground up. Who will be the best ninjas? Could it be you and your team?