MacGregor Clan Crest: A crowned lions head. MacGregor Clan Motto: 'S Rioghal Mo Dhream (Royal is my race). History of Clan MacGregor: Clan Gregor is the senior member of Clan Alpin and in the reign of Alexander II, held the lands of Glenstrae, Glenlochy, Glen Lyon and Glen Orchy. The MacGregor Tartan, common like other tartans, to the whole clan has erroneously been styled ‘Rob Roy’ in the shops.” My belief is that thanks to Sir Walter Scott and his book Rob Roy, peoples’ romantic imagination got the better of them and the tartan industry spotted a marketing opportunity. The MacGregor clan lived in a rough, rocky and mountainous region. To survive they many times raided neighboring clans, especially the Colquhoun clan. With permission given in early February of 1603 the Colquhouns gathered forces of 500 men on foot and 300 mounted men.

Following the MacGregor massacre of more than 140 Colquhouns â€“ and a party of schoolboys who came to watch - at the Battle of Glen Fruin in 1603, King James VI outlawed the MacGregor Clan. Under the Proscriptive Acts of Clan Gregor, which came into force on the 3rd of April 1603 the name MacGregor 'altogidder abolished' and bearing the MacGregor name was punishable by death.

MacGregor women were branded and their children were given to other families. MacGregors couldn't travel in groups of more than two and couldn't cut meat with a blade. The men were executed, the women were stripped bare, branded, and whipped through the streets, and women and children were sold into slavery for Britain's new colonies in North America. MacGregors were denied food, water and shelter. They were denied the Sacraments of Baptism, Holy Communion, marriage, and last rites. They were hunted with dogs like vermin. And MacGregor heads could be sold to the government to attain pardon for thievery and murder. It was a licence to kill - and for big rewards: £1,000 for the clan's most important members.

In the spring of 1604, Alasdair MacGregor of Glenstrae, Chief and Laird of MacGregor was hung with thirty of his warrior clansmen against the western end of St Giles Kirk.

The crown of St Giles on the Edinburgh skyline

Today, the Heart of Midlothian marks the spot where he died and the direct male line of the MacGregor chiefs was extinguished. This gave rise to what is now an old Highland custom, when you pass here you spit on it.

The Heart of Midlothian

The most famous MacGregor's life reads like a western. Such was his notoriety that he became a legend in his lifetime as a bandit, an outlaw, a rebel and loveable rogue, a friend to the poor and saviour of the clan name, a man whose exploits would restore some of the lost dignity. Born on the shores of Loch Katrine in 1671, some of the Rob Roy legend is true. And just when he was at his lowest point, fiction came to his rescue.

In 1723 Daniel Defoe, author of Moll Flanders and Robinson Crusoe, published a fictionalised account of Rob's life called Highland Rogue and Rob became a legend in his own lifetime. The book was so popular King George I pardoned Rob, just as he was about to be transported. And when Sir Walter Scott's Rob Roy was published in 1817 it sold 10,000 copies in a fortnight. In 1878 the football team Kirkintilloch Rob Roy was founded in Rob's memory.

Rob Roy's grave at Balquidder, where he is buried beside
his wife Helen and his sons Coll and Robin Oig

The story of the MacGregor Clan, their origins and history, the story of Grigor Roy and Marion Campbell, the Battle of Glen Fruin and the outlawing of the clan, their most famous member and the adventures of his sons after their father's death is told in the Galloglas DVD, MacGregor. Filmed on location to the highest standards the MacGregor Clan features unique stories that interweave romance, adventure, murder, bravery and betrayal, filmed across the seasons and set against stunning landscapes.

History of Clan MacGregor:
Clan Gregor is the senior member of Clan Alpin and in the reign of Alexander II, held the lands of Glenstrae, Glenlochy, Glen Lyon and Glen Orchy. Tradition has it that they are the descendants of Grigor, third son of Kenneth MacAlpin, King of Scots in the 9th century, hence the Clan Motto: “Royal is my Race.”

When Robert the Bruce gifted the Barony of Loch Awe, which included the MacGregor lands, to the Campbells, an uneasy confrontation commenced. It lasted for almost two centuries, with the MacGregors retreating into remote Glenstrae and operating as cattle raiders in order to survive.

The MacGregors were faced with their greatest persecution in the reign of James VI when the name and race of MacGregor were proscribed. In 1603, the MacGregors won a battle against the Colquhouns of Luss at Glenfruin, but the Colquhouns had a Royal Commission, and vengeance was swift. The Chief, along with eleven of his chieftains, were captured and hanged at Edinburgh's Mercat Cross in 1604.

Those who escaped were forced to change their name and for their illusiveness, became known as “The Children of the Mist.” The persecution continued into the reign of Charles I. When the Marquis of Montrose raised the King's Standard in 1644, the Laird of MacGregor came forward and joined him. At the restoration, the Clan was therefore pardoned, but it was not until 1775 that it was restored to its rightful name.

Over those 170 years many clansfolk had sought sanctuary with other clans and had changed their names. In 1775, a petition was signed by eight hundred and twenty six MacGregors nominating General John Murray of Lanrick, a descendant of Duncan MacGregor of Ardchoille, as Chief. His son, Sir Evan, son-in-law of the 4th Duke of Atholl, played a prominent role during the historic visit of George IV to Scotland in 1822.

One of the most notorious of the name was Rob Roy MacGregor (1671-1734), a younger son of MacGregor of Glengyle, who farmed at Balquhidder. First immortalised by Sir Walter Scott, in 1995 he was the subject of a Hollywood film Rob Roy.

Sir James McGrigor ( 1771-1858) was Chief of the Duke of Wellington's Medical Staff during the Peninsular War. John MacGregor (1825-92) pioneered the sport of canoeing in Britain. Sir William MacGregor (1847-1919) was Governor of New Guinea, Lagos, Newfoundland and Queensland. Ewan McGregor, born in Crieff in 1971, has appeared in a series of enormously successful Hollywood films.

Surname distribution in Scotland: The MacGregor name is most common in Highland (including the historic counties of Caithness, Inverness-shire, Sutherland, Nairnshire and Ross and Cromarty), Perth and Kinross (Perthshire and Kinross-shire), Angus (Forfarshire) and Dundee City.

Places of Interest:
Inversnaid, Loch Lomond, Dunbartonshire. A path leads to Rob Roy's Cave. Robert the Bruce is also said to have hidden here in 1306.

Balquhidder, Argyll. The outlaw Rob Roy MacGregor farmed here, and he is buried in the churchyard of Balquhidder Church.

Glenorchy, Argyll. These lands were bestowed upon the MacGregors by Alexander II.

Glen Fruin, Dunbartonshire. In 1601, during the feud between the MacGregors and the Colquhouns of Luss, 200 Colquhouns were killed at the battle which took place here. The MacGregors were subsequently outlawed for the deed by James VI.

Inchcailloch, off Balmaha, Dunbartonshire. This is the ancestral burial place of Clan MacGregor. 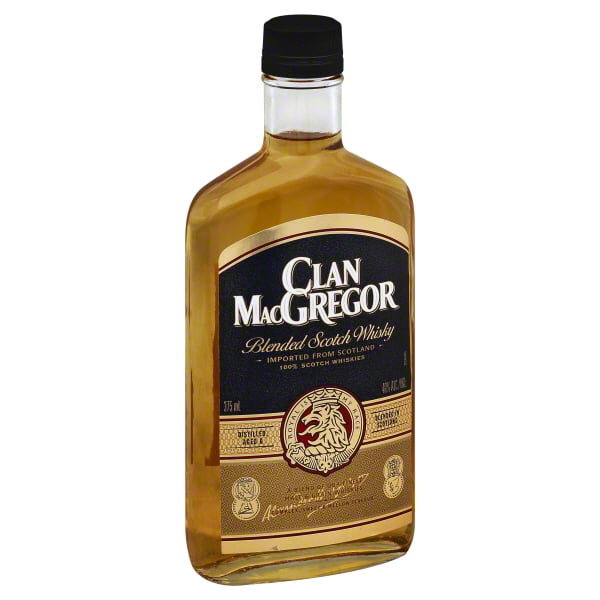