ClamXav is a free antivirus solution based on the Open Source engine, ClamAV.
Even though Mac OS X is considered a secure operating system from the viruses that actively attack the system point of view, the users shouldn't enjoy the 'status quo'. The thing is, there are certain situations when a Windows virus can attack a Mac OS installation or an unwanted program can do that too in certain situations.

ClamXav for Mac gives you the tools to keep your computer clean. With an uncluttered interface and convenient functionality, this app is a good choice for most computer-savvy users. Review: Fight Mac malware with Avast Free Antivirus. Scrivener: A Mac app designed by writers for writers. Burn and share CDs and DVDs with Toast Titanium.

The antivirus isn't running as a real-time on-access scanner, so you need to scan your files manually. You have on the application's interface a drop zone where you can drag-and-drop the folder or the file you want to scan. With this program you can scan e-mail files too in order to reduce the risk of infection.

A nice setting is the possibility to set a 'Folder Sentry' list. All the folders from this list is going to be watched by ClamXav. You can enable from the same panel the possibility to scan the inserted disks or the startup setting for this application.
The scheduler is well structured and basically it can do several main jobs. The first job is the scheduled scan. The second one is the schedule update. Both jobs are working seamlessly, depending on your predefined settings.
Usually the virus database is updated daily. This thing depends on the producer though but usually you can see every day a 'Downloading daily.cvd' action within this antivirus.
Pluses: It is a free application that can keep you safe from unwanted applications.

Drawbacks / flaws: it doesn't has a real-time on-access scanner so you have to be careful with every new and suspicious item.
In conclusion: if you don't like spending a lot of money for a fancy commercial antivirus and you would like though to have the security feeling, then try this tool.
version reviewed: 1.0.4

Show viruses and adware the door

With the ClamXAV scanner heading off any security threats to your Mac, it’s easy to get rid of unwanted intruders at home 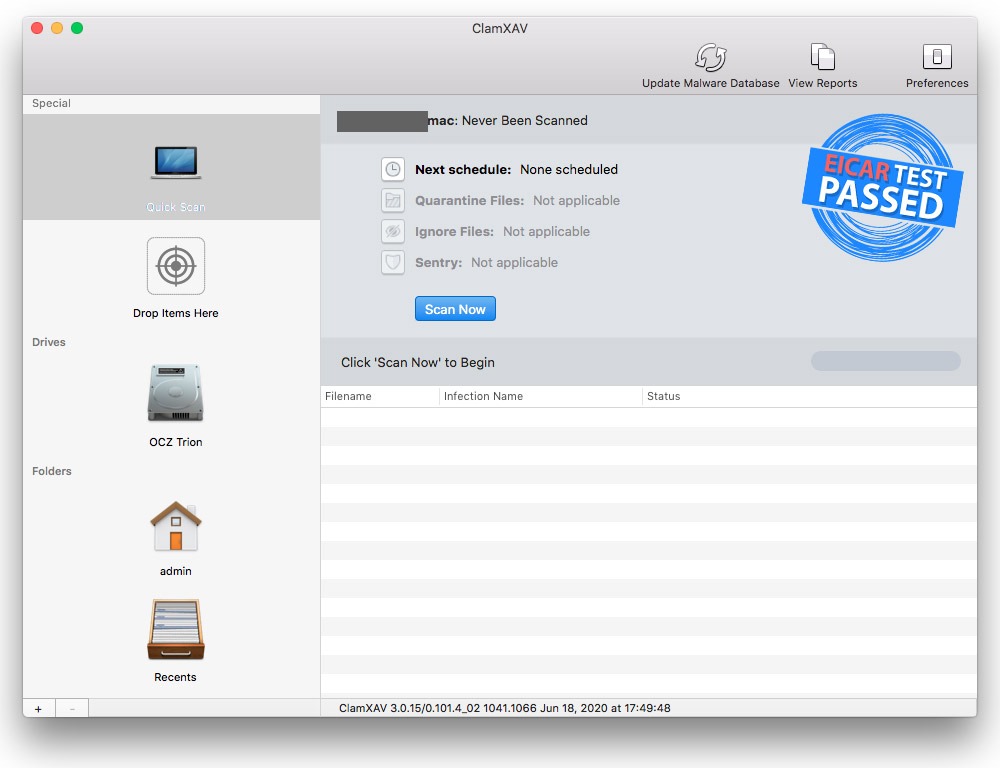 ClamXAV is a highly trusted anti-virus and malware scanner for macOS. It detects threats and keeps the Mac in your home clean, safe and virus-free. It also ensures you don’t pass on security threats and nasty viruses to anyone else.

‣ You're in control

ClamXAV can either scan specific files or your entire hard drive – it’s up to you and it only takes a couple of clicks to start the process. It will scan any incoming new files the instant they arrive and can put suspicious ones straight into quarantine.

ClamXAV automatically updates virus definitions, aiming to keep one step ahead of any unpleasant intruders trying to gain access to your Mac. You can programme automated scans at a time that suits you and you even won’t notice ClamXAV working away quietly in the background.

Want to put a stop to irritating pop up adverts? Thought so! That’s why ClamXAV blocks adware too, leaving you free to get on with whatever you’re doing, without unwanted interruptions.