Three CDs for MMI software update 5.5.70. Note that this is not a navigation map, but your media system update. This update will fix a lot of minor issues - better performance of rain and light sensors, minor sound quality improvements, etc. In addition, there is another bigger improvement - new 3D mode is added for navigation (if your car is equipped with DVD navigation and MMI High)

Navigation notifications are off while a phone call is in progress.

The volume of music is reduced during navigation notifications.

Navigate the arrow while searching for an IP. 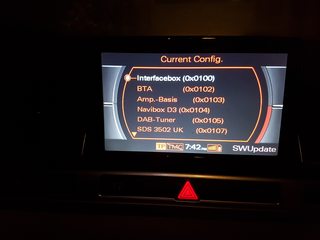 AMI support for ACC and WAV files over USB

Audi dropped support for MMI 2G software updates at version 5570, but continues to publish GPS maps for DVDs each year for this system.

Check you current software version and confirm that it is lower than 5570.

Update procedure can take couple of hours. It is important to eliminate any power shortage. If you are in poor condition, we recommend using the battery charger while performing this procedure.

Turn any unnecessary devices that can cause battery drain while the key is in the ACC position (HVAC system, interior and exterior lights, audio system, phone charger). During this procedure do not use any electrical accessories (electric windows, power seats, central lock, electric boot lid).

Take out CDs from the CD changer that's in the glove box or in the center console.

It is possible to update to version 5570 only from software 5150 or higher. This step is necessary only if you are running a software version lower than 5150.

Turn the key to position II and wait for the Audi Multi Media Interface to start.

Load CD1 into the first slot in the CD changer.

Press and hold the SETUP and RETURN buttons.

After a couple of second hidden red menu will appear. Release the buttons.

Go to SWUpdate → CD-ROM. Update CD content will be verified. Audio will mute.

The list of devices ready for the update will appear on the screen. Scroll down to Start download position and confirm the update. This will take up to 40 minutes.

Once the update is complete, you will see the update status. Scroll down to restart the MMI and press it. The system will reboot and return to normal operation.

This is only required if your car is equipped with a Bluetooth hands-free system.

You must do this twice when the first update procedure removes the memory of the Bluetooth device. it will actually install the new software the second time you run the CD2 update.